My review of the compelling documentary about cartoonist John Porcellino, Root Hog or Die, is up at The Comics Journal. I reviewed the screening held recently at The Billy Ireland Cartoon Library and Museum.

“I hope that Root Hog or Die is a demystifying punch in the gut for those who romanticize “nuts” and “weird” into a hip and glorious live-fast-die-young aesthetic and, in doing so, belittle the dignity of an artist’s life. It’s easier to do when you’re younger. I know I did. Suffering seemed sexy, until I actually suffered. If you know someone who thinks this way, or, alternately, someone who is troubled and sees no light, take them to see this film. Because in the end, the most powerful quality about Root Hog or Die, and truly, the highest praise I can give it, is that it denies any glamorization of illness.{C} 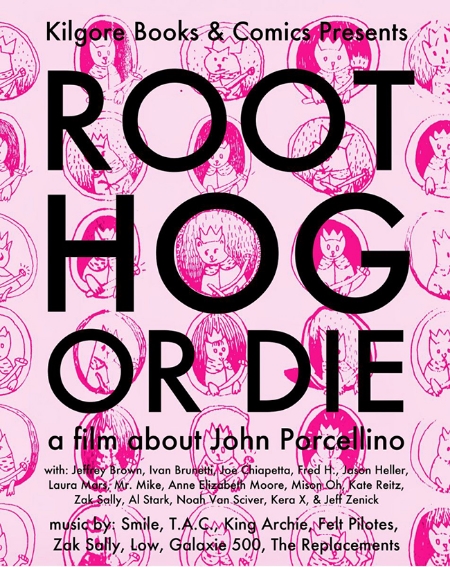 At one point I was going to title the review “Sacrificial Pancakes” after a comment Porcellino made at the Billy Ireland comparing the wearing out of drawing pens to those first couple pancakes you make in order to get the rest of them right. Then I cut that recounting in the review, so the title had to change, probably for the best, since it’s a stupid title for the review.

After the screening, Porcellino took a question asking if he considered his work to be political, and I thought his answer was right on. (I wasn’t taking notes, unfortunately, so this is my recollection.) Basically he pointed out that the method of making his art, its content and its distribution, has always been political in that he resists the power structures of typical art-making in favor of underground, DIY structures. I think that’s pretty clear to anyone familiar with his work, but I wish I’d described that more in the review.

Also, the film uses Low’s “Sunflower,” a beautiful song from Things We Lost in the Fire.